Bob Dylan first recorded “The Times They Are A-Changin’’ in 1963. It’s a sentiment that’s a feature of our industry and no doubt strikes a chord with many people today, given the
tumultuous events of recent years.

There are some particular parallels with that time in history too. It was shortly after the world held its breath as the Cuban Missile crisis unfolded; whilst a decade or so later people were left reeling from the shock of the first oil crisis. Two events which feel more
familiar at the moment as we witness the dreadful war in Ukraine and the related
concerns over energy security and steep increases in the cost of living.

By coincidence, 1963 was also the year that the International Federation of ABC’s (IFABC) was founded, during the International Advertising Association Congress held in Stockholm. By that time various ABC’s around the world had been operating for decades, including your own IVW and our ABC in the UK, agreeing standards and providing trusted data for the media industry. IFABC provides a forum for its members to collaborate, learn from and support each other. More vital now than ever in many respects.

Here are a few thoughts on our history and why ABC’s remain well-placed to provide valued services for our industry, some ideas on what those could look like going forward, and key considerations when developing new areas.

I don’t have a crystal ball to predict the future. That would be handy, particularly so at the end of 2019 when I was writing for our newsletter. The hot topics in the UK news then were the impending results of our General Election, Brexit and the forthcoming Presidential election in the USA. None of these were expected to run smoothly, but
nobody had the faintest idea that the latter would culminate in the storming of the
Capitol Building. And at the time, COVID wasn’t a term we were familiar with, even though it would knock the other three topics off the headlines in under three months.

The pandemic accelerated changes that would otherwise have happened over a longer period. To take one small example, we introduced Zoom to our business in 2019, influenced by IFABC’s use of the service. For months I encouraged people to try it,
but with little take-up.

Now, video-conferencing is a default tool for most of us. I’m sure if we hadn’t been forced down that route I’d still be attempting to persuade colleagues to give it a try!

Our industry is certainly no stranger to change. News media reports on it and we’re all subject to it. In our case, the advent of digital technology has been its predominant driver over the last 30 years. In 1991 Tim Berners-Lee announced the WWW project and the first website was published (Info.cern.ch in case you’re wondering).
It was not a big news item.

Just five years later, ABC UK set up ABCe, a subsidiary to specialise in auditing web traffic, followed by JICWEBS (Joint Industry Committee for Web Standards) in 1999. This was a new field for us but our underlying principles provided the foundation for our expansion into this new area. This is because ABC’s key attributes of a tri-partite structure and not-for-profit principles apply broadly, not only in print. They’ve stood the test of time and the JIC structure remains a highly effective way of delivering trust. As my Chairman remarked to me during his early days in office – “ABC is a trust factory”.

So digital was on its way and we were responding to that. There was a lot of innovation, but it was probably a further ten years before we truly began to see the long-term impact of the technology. In particular, in the aftermath of the financial crisis of 2008.

Adding web traffic to the existing print business has been a successful strategy, building on IVW’s excellent reputation and strong business in magazines and newspapers. 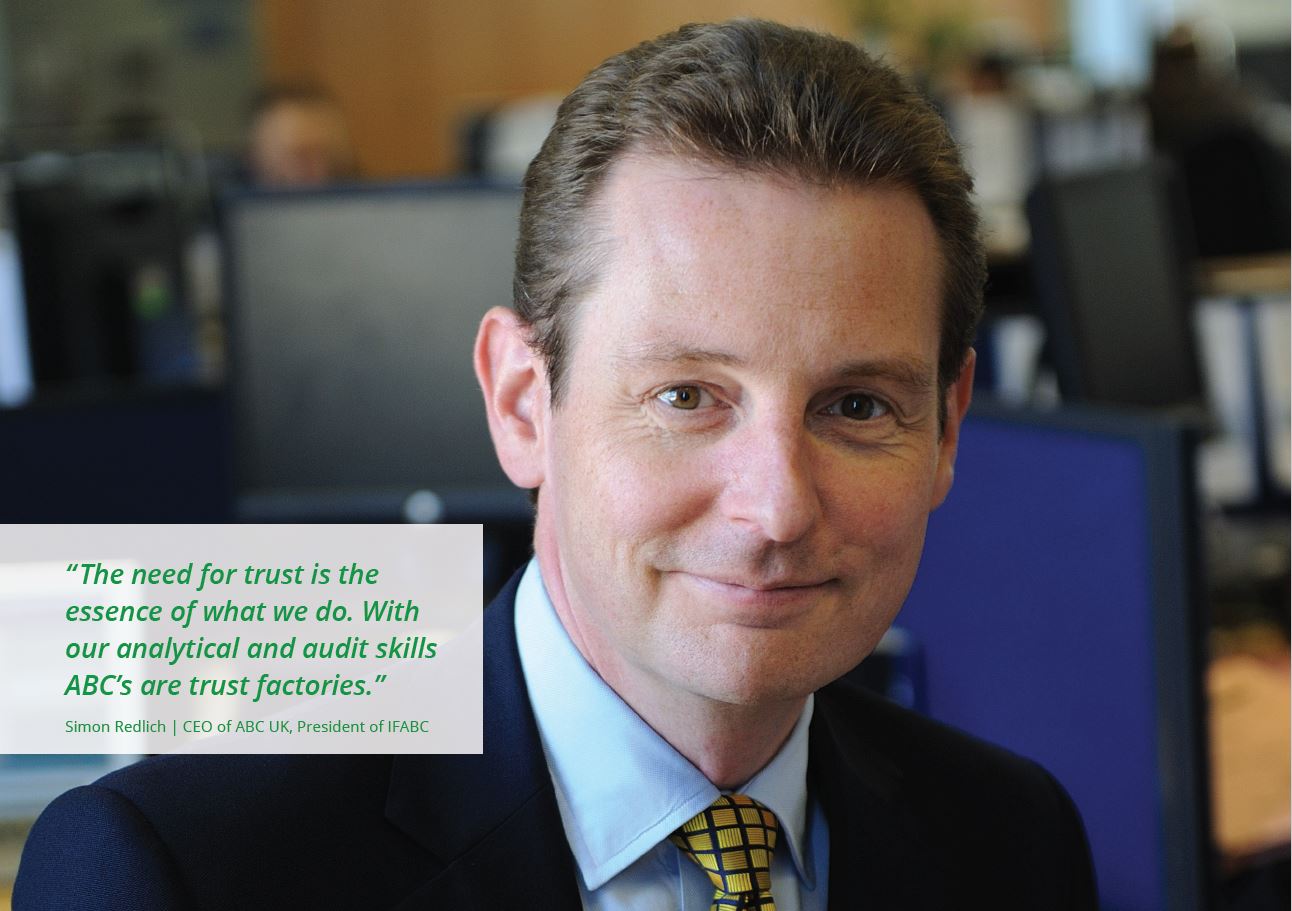 Adapting with the industry

Like us, IVW added web traffic to the existing print business. It’s been a successful strategy, building on IVW’s excellent reputation and strong business in magazines and newspapers. After growing digital to approximately one-third of revenues, the print and digital elements of the business have been consistent for a number of years until
showing some slight reduction more recently.

It’s here that our experience in the UK perhaps differs a little. Across a similar timeframe our print business has seen greater declines, whilst within digital there’s been
a shift away from the web traffic audits of ABCe’s early days. Over time the demand in digital moved from being about numbers to a focus on processes and good practice.
So our digital revenues have changed in nature.

Web traffic audits have been replaced by auditing good practice in online advertising; digital TV data; data privacy codes and collaborating with a number of other industry bodies.

ABC’s around the world have similarly adapted to the changing environment, with initiatives including Out-of-Home in Brazil, France and Spain; Influencers in Australia and Sweden; Brand Safety in the UK and Japan and Point-of-Care Media in the US. These
examples cover a range of different areas and demonstrate the adaptability of ABC’s. But the initiatives have common features – meeting a demand in the local market and building on the existing skill base as well as their reputation for robust impartiality.

The demand for trust

Trust is in demand on many fronts. Governments recognise the vital role played by
a vibrant free press which sustains high quality journalism. Studies such as The Cairncross Review in the UK and plans for a European Media Freedom Act are just two
examples. They demonstrate the need for appropriate regulatory frameworks in which self-regulation plays a vitally important part.

Something ABC’s are well placed to help deliver. The Trust Project; The Journalism Trust Initiative and Trust.txt are all tangible examples of efforts to meet this need.

Closer to home the WFA has been vociferous about the needs of its members. Their Global Media Charter lists “third-party verification and measurement as a basic” as one of its eight principles; and their Cross Media Measurement Framework lists “trust & transparency enshrined through regular audits” as one of the industry requirements.

This need for trust is the essence of what we do. Alongside the analytical and audit skills JICs such as IVW possess, it opens up a wealth of possibilities. Some, such as data privacy, we’ve already mentioned. Other potential examples might include the environment and sustainability. Such matters are no flash in the plan but will be with us
for the long-term.

So what are the challenges in finding new ways to serve the market?

Identify your priorities. Sometimes if feels that there’s a new initiative every month.
In some ways that’s great, but it can cause confusion, which tends to lead to procrastination. It can also make it difficult to know where to direct your effort. Here our tripartite structures have a valuable role to play. They can help to identify what the
industry values and wants to prioritise. What’s the need we’re meeting and how
well does it fit our skill set?

You may not be managing the standard. We’re used to working in areas where we facilitate the setting of industry-agreed standards. This won’t always be the case.
Providing the audit service to underpin a standard managed by another organisation
is fine, just different. You may be subject to changes in policy, and the audit will need to reflect updates to the standards, but a good dialogue with the standard setting body
helps avoid surprises. Collaboration is part of our DNA so this will come naturally.

Invest in training. Audit and analytical skills can be applied to a range of different areas. Some new initiatives may require a slightly different approach though. Auditing data or auditing a process, for example. Or learning about a new area such as Influencers or Data Privacy. It’s typically a question of building on existing skills and knowledge but it makes a big difference if you can get ahead of the game on training. It’s also a great way
to invest in your staff.

Training can take many forms and as mentioned earlier, IFABC provides a forum for its members to collaborate and learn from each other. In the UK we had the pleasure of a visit from ABC Japan who wanted to learn about brand safety. It’s gratifying to see this culminate in ABC Japan playing an important role in the recent JIQDAQ initiative in Japan. Other examples include ABC’s collaborating to develop technology, such as website tagging, and sharing know-how in Out-of-Home.

And one final thought, specifically for the industry. Make the most of this asset you have. JIC’s such as IVW have stood the test of time. Meeting industry needs and delivering trusted data. Both in ways that have been agreed and refined by consensus. The consensus may not always be easy to achieve but the results are all the more powerful
for it. Take advantage of the skills at your disposal to address the future needs of your businesses. Build on that skill and experience to deliver the trust that’s needed. There’s no need to start from scratch every time.

JIC’s such as IVW have stood the test of time. Meeting industry needs and delivering trusted data.